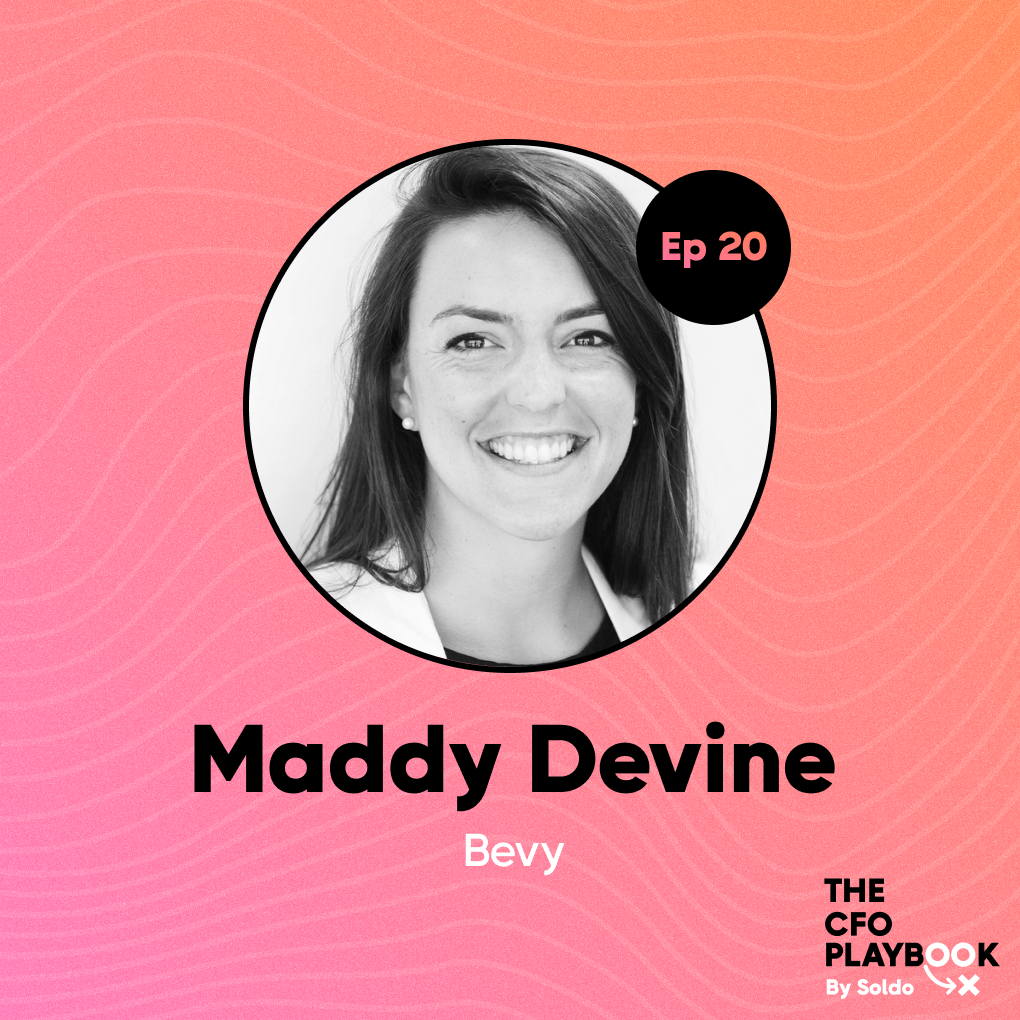 Maddy Devine traded consulting with multinational corporations for building startup finance teams from the ground up. As VP of Finance at virtual conference software company Bevy, she wants to work with people who look beyond the numbers to see business opportunities.

Maddy Devine traded consulting with multinational corporations for building startup finance teams from the ground up — and she’s never looked back.

Maddy may have the least traditional career path into finance of any CFO Playbook guest so far.

After graduating into a job market reeling from the 2008 financial crisis with a BA in English, she worked as a teacher through Teach for America, before completing an MBA in Finance & Social Entrepreneurship.

Her first job was consulting for Accenture, but the erratic schedule and constant travel pushed her to make a change.

She moved into the startup world, first as Director of Financial Planning and Analysis (FP&A) at market research firm Lucid, and now as VP of Finance at virtual conference software company Bevy.

Maddy believes that the two key components of building a finance department that fuels business growth are the tech and the people. Not necessarily in that order.

Maddy looks for people who share the belief that finance should be about more than making sure what’s going out is balanced out by what’s coming in. Her team outsources that work, so they can focus on strategizing.

On the tech side, Maddy won’t settle for a tool that can’t scale along with the business. Researching and implementing software is a significant commitment of time and energy, so you need to make sure you’re not going to outgrow your investment within a few months.

On this episode of The CFO Playbook, Maddy explains which part of the function startup finance leaders need to tackle first, how to find a balance between protecting your budget and empowering departments on the business end, and the skills she looks for in her team.

What she does: After graduating with a BA in English, Maddy initially went into teaching before getting an MBA in Finance & Social Entrepreneurship from Duke University. She became a consultant at Accenture, mainly working on budgeting strategies, and then became Director of Financial Planning & Analysis (FP&A) at startup Lucid. She joined Bevy as Director of Finance in September 2019, and was promoted to VP of Finance in March 2021.

Key Quote: “When people are at an earlier stage in their career, it’s really important to look at what they're good at and what they like doing, and be really intentional. Some of the best career moves I made came about a year after I realized that I wanted to do something new. I was really intentional about first of all figuring out what I wanted to do next, and then starting to create a path towards finding a new role, or a new opportunity within a current situation.”

Where to find Maddy: LinkedIn

Hiring is one of the most important parts of finance leadership.

Software is nice but it’s the people on your team who make the real difference between being a support or a hold-up for the rest of the business. Bevy outsources busy work like bookkeeping, which means Maddy’s hiring has focused on leadership roles. She’s looked for people who have a strategic vision, not just a head for numbers. That has also meant learning to delegate, which hasn’t always been easy: as Maddy says, finance executives are known for taking control!

At Accenture, Maddy strategized with well-established companies looking for opportunities to spend their budgets more effectively. When she switched to startups, she had to work from the ground up, making sure the financial foundations were solid before moving on to the fun stuff.

At Lucid, for example, her first target was the chart of accounts (COA). After getting those fundamentals to a secure place, she moved on to processes, invoicing and scaling. As a leader, it’s tempting to charge straight into long-term strategy: but you have to make sure the foundations will hold before you start building on them.

Find software that provides both guardrails and support.

The default role of finance is to constantly say “yes” so as not to be seen as a hindrance to progress, or to constantly say “no” out of deference to King Budget. Neither of these approaches is helpful in the long term, because they don’t paint the true picture of what a company can afford. Instead, finance should be transparent with departments about their budgets: that means explaining why as well as how much. Then give them tools so they can make their own informed decisions.

Like a lot of companies, Bevy was shaken up by the calls from Black Lives Matter protesters. Unlike a lot of companies, Bevy has made a real and continuing effort to hire people of color in a variety of roles, and to make sure they are coming into a culture that is welcoming and supportive. That meant being proactive about finding excellent candidates from often overlooked backgrounds, and being open-minded about the kinds of skills you look for — something Maddy, an English major now in finance, can relate to.

Hiring the best, not the most

“Hiring is so important. … We work with an outsource team that does our bookkeeping, so I'm trying to be intentional about building a team where you have more senior leadership crafting the vision, and being innovative about how we build a function that's scalable. It’s not just trying to throw bodies at the problem, and have hires be the solution.”

“My philosophy is that in order to scale a function like finance, you have to start with all of the data that you're gathering from your CRM. You have to start with your structure and the way that you view your business, and make sure that's aligned with your investors, with how your company operates, and how everyone is thinking about the business. Building on top of that is easier, because you've dealt with what I like to call accounting debt: I worked for a technology company and supported our CTO, so tech debt was a big topic.”

“There's foundational work that needs to be operating correctly in order to build stuff on top of it. That was a huge priority in my first couple of months [at Bevy]. It took a lot of time because there were burning priorities every day and things that needed to be dealt with. The challenge was being able to make significant progress on some of our long-term projects at the same time as making sure the business was running. That has been hard work, but we're reaping the benefits of it now.”

There are two types of finance departments...

“There are two approaches that finance can take. One is fueling growth, which is where we want to be. Let's create the systems, the tools and the parameters to make sure we are financially managing the business in a way that means the business leaders are empowered to make decisions. And the second — which is what people default to, because it's the way things have always been done — is controlling growth, or feeling like you have to say yes to everything or no to everything, and have your hands in every pot.”

Don’t be scared to say no — or yes

“[The word] ‘no’ certainly has a place in business — but it's easier to say no when you give somebody the full picture. It's also fine if you say yes: If they're saying they really need something and it fits within the plan, and they understand the trade-offs they're making, that's their decision to make.”

Treat your tools as long-term investments

“Implementing tools is very time-consuming. People say retention is a good thing, because hiring people is expensive and having turnover is expensive. It's the same thing for tools, because on top of all the other priorities that the business might have, you invest your time in building a solution.”

Always ask if this process could be more efficient

“I have never been one for manual work where it can be automated. My brain is always optimizing for what's a better way of doing this. I want to push myself as a leader to think about, what is the true problem and what are the possibilities of how to approach it? Root cause analysis: what is really driving this issue, what are some possible solutions, and what are the pros and cons to each of them? And then make a decision based on what makes sense.”

“[Hiring Black candidates] is not just a marketing tactic or campaign: It's the group of people that we have in our company that work together every day. It's not just about inclusion or diversity, or what this looks like for a PR campaign. It's in the thread of everything on every team and every function: having a better representation of people from different backgrounds.”

“I'm building a team that is focused on outcome analysis and business insights, and making sure that all of our processes and controls are in place, so we don't get distracted from what we're trying to accomplish as a business.”

“I'm not doing my job if I'm not thinking about where we're going to be in three to five years.”

“People always think finance is a big insights engine, but you can only have insights if you have the underlying data that's going to reflect what you're trying to analyze. And that work is very underrated.”

“Business partnering is what I enjoy the most, and to me it’s where finance — and FP&A in particular — can really help.”

“No finance leader gets it perfectly right every time, but we're focusing on creating the controls and implementing the tools that will make it easier for that decision-making to happen.”

“Your customers are not just your customers: They're your business partners, they're your vendors. They're anyone that you're supporting and engaging with, internally or externally.”