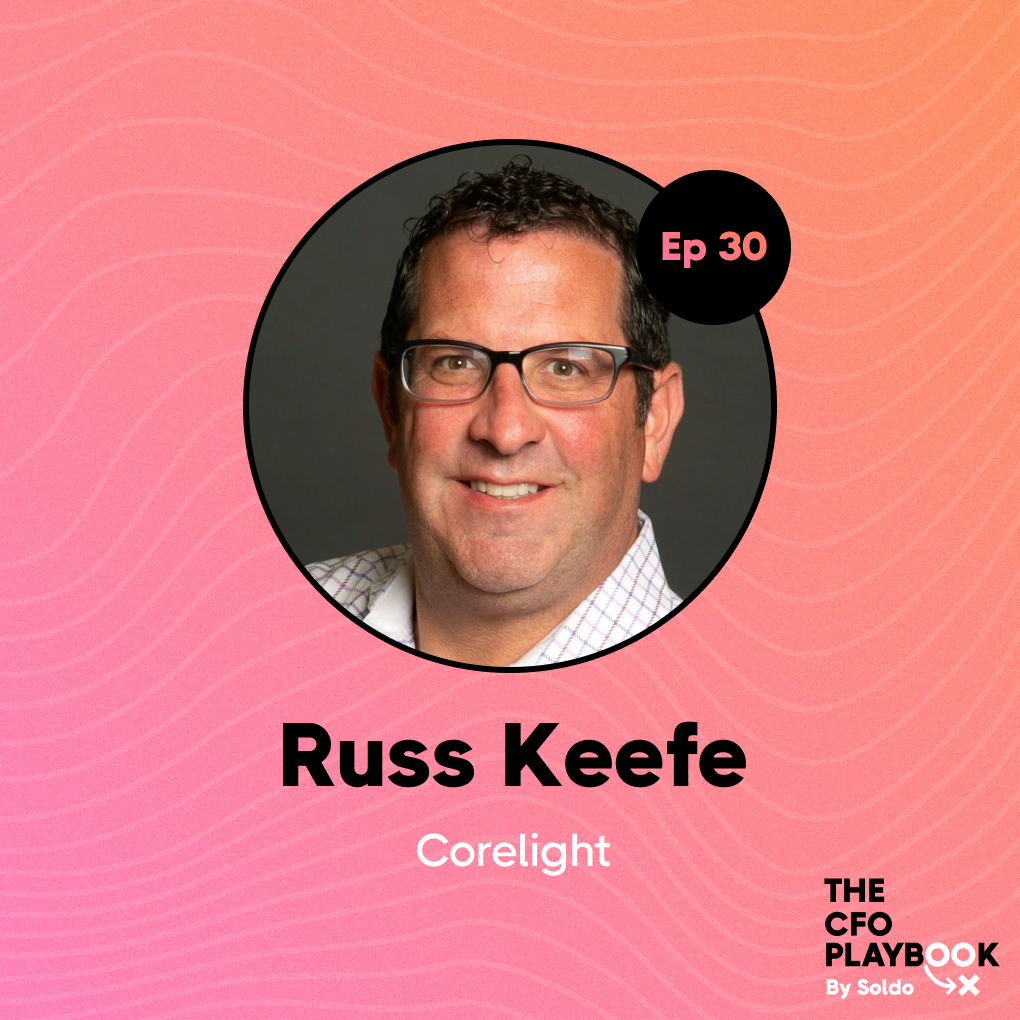 30 Corelight | With Russ Keefe, VP of Finance and Operations

When Russ Keefe became CFO of cybersecurity firm Corelight, he studied up on the history of the industry. He believes that the best finance executives are the ones with a deep understanding of their business.

Russ Keefe had never worked at a cybersecurity firm before he became CFO of Corelight in 2017. Not one to put limits on his opportunities, Russ took an analog approach to getting caught up: he read “a bunch of books” on the history of cybersecurity.

This homework helped him understand the business more deeply, which Russ considers an essential part of being a CFO.

Early in his career, Russ was happy just to get the budget out on time and approved by the board. But as he progressed, he realized that the most effective finance leaders are the ones who make an effort to empathize with their colleagues in other departments, and consider their own department’s impact on business development.

Russ learned about non-finance experience first-hand when he was given the opportunity to work in sales ops. He spent time talking to salespeople about the sales compensation plans he’d put together, hearing how it affected them and why they wanted certain changes.

This experience made him appreciate that financial calculations should be collaborative. It also helped his resume: In addition to being CFO of Corelight, Russ is VP of Finance, Legal, and Operations.

It’s not just Russ who’s started to think about finance roles as more than just a numbers game.

He says that today, the brightest finance graduates expect to exercise some entrepreneurial muscle. This puts pressure on the finance leaders who want to hire them, to create a role that allows for input into the business. It helps that companies that take this approach often see it pay off on the bottom line.

On this episode of The CFO Playbook, Russ explains why he believes transparency is key, his collaborative approach to budgets, and who the finance team's customers are (they’re nearer than you might think.)

What he does: Russ previously worked as a financial analyst for the Security and Exchange Commission (SEC), and as the CFO of Riverbed Technology, which he saw through its IPO, and of HighWire Press, managing its first acquisition. Since 2017, he’s been the CFO and VP of Finance, Legal, and Operations at cybersecurity firm Corelight.

Key Quote: “I would always encourage [aspiring finance leaders] to take an ops role, or at least strive to learn what people are going through on a day-to-day basis, whether it's in sales or marketing or whatnot.”

Perhaps it’s his stint as a financial analyst with the U.S. Securities and Exchange Commission (SEC), but Russ has an unusual take on transparency for a tech leader, in that he believes more is better. At Corelight, he takes the time to explain how financial modeling works to any employees that are interested, as well as how their stock options work. He believes this empowers them to make more informed decisions in their own roles.

The budget doesn’t have to be black and white.

Your budget doesn’t just have to keep you in the black: it can be shades of grey too! Russ used to be thrilled just to have everything balanced and signed off. But over time, he’s learned that incorporating input from different departments on what they need and why can lead to a more effective budget. There should be room for collaboration.

Build trust into your budget.

If Yes Men are one kind of problem in a business, the finance department is often seen as the No Men (and women.) Having a reputation for holding a hard line doesn’t do you any favors in the long term, Russ says. If department heads believe that you’re going to cut the budget they request in half, they’ll double their price before you even meet, which leads to inflation. Show them that you can be fair, and come to a compromise.

Hire for empathy in finance.

The finance team should see themselves as advisors to everyone else in the business, which means their colleagues are their customers. It’s important to hire people who, in addition to knowing the finance basics, can empathize with others, and who view their role as helping the people they work with meet their goals.

“One of the things that I do at Corelight is Stock Options 101. I make sure people understand the basics: It's amazing how many people don't. Now, there are so many more resources on the web where people can go and read about it. But I do think it’s incumbent on the company to try to educate their employees. If I want you to value this equity as a meaningful part of your compensation, then I should educate you on why it is.”

Learning to get into the weeds

“Early in my career, my goodness, I was just happy that I got the financial model to work! Everything ties out, the financial model works, this is roughly what the board expects in terms of growth in spend and cash burn. OK: Wash my hands of it. Now what I aspire to do is make sure that it's connected deeply into the business. Does this match up with our pricing models? Does our engineering team feel like they have the resources to deliver against the roadmap? You drive that to the bottom-up model and into actual practices of the company.”

Take time away from the spreadsheets

“I would encourage people who are on this journey to try an operations role when they have an opportunity. I got to work with Graham Smith, who became the long time CFO of Salesforce, and he gave me the opportunity to run sales ops. You have a much deeper appreciation of the business, beyond the ones and zeros, beyond the spreadsheets, to the actual people and the emotional and psychological aspects of it.”

Find out what a dollar can do for another department

“A growth opportunity for people in the finance world is to be involved in projects and try to help, beyond just saying I'm going to give you X dollars to go run this experiment. Actually follow what's working: How many leads did we get from it? How many of those converted? Really understanding it deeply is an important part of gaining empathy for the challenges that the engineering team is running into — the marketing team, the operations team, the support team — so you can always approach those business leaders with empathy.”

Be the advisor, not the enforcer

“Our customers are the employees. Our customers are the managers, the VPs, or the C-suite. We're meant to be trusted advisors for them. If we see things go sideways, how can we help them solve that problem? We're not there to go and beat them up. We went over budget: How can we solve this going forward? Is this something that we need to address and fund? Should we talk about how we can fund this going forward? Being that trusted advisor and looking at internal folks and employees as our customers.”

Take on a mission (you’ll do better with one)

“Another thing that’s important for working with both your team and the company overall is, you really need to have a mission. Just being a for-profit business isn't necessarily enough in the modern world. You really need to be a mission-oriented company. That's critical, to have people sign up for the mission. One of the reasons I joined Corelight is that I truly do believe in the mission. Helping protect the world's networks and make them safer is something that will benefit everyone.”

Give people the opportunity to pleasantly surprise you

“ I want them [colleagues and department heads] to be able to make decisions on their own that are best for the company. You have to empower that. Sometimes you have to let them make mistakes, or do things that I wouldn't have done that way. I can learn from them, and decide that maybe we should tweak the rules or tweak the programs that we have in place to account for this new aspect that we hadn't previously thought of.”

“We would have had a much larger accounting or finance team 10 or 15 years ago than we have today. I’m fortunate that I have super smart people in those groups who are able to put in this automation, because quite frankly, they don't want to do [those tasks] in their day jobs. I spend $10,000 or whatnot on some tools for a year, that's going to take away 100 hours of manual work. I've been really fortunate to have a team that gets those things, and that's what you want. You want people who are excited to go learn about technology.”

“A warning sign to me is when executives answer, Yes, I can go do that. Are you sure you can go do that? What is your plan to deliver against that?”

“One of the things I've really been working on here is to make sure that it’s a team. ... As a team, we'll succeed together, and we as a team fail together.”

“I make sure to interview for that [empathy] mindset, not just the technical skills. You're a finance person or you're an Excel wizard, and you understand the basics of corporate financial planning analysis, but do you have that empathy? And do you see part of your role as being a trusted advisor, and someone who is service-oriented?”

“The world tends to be smaller than you think. One bad customer experience can get out there in the wild.”

“Before, it was all about control and compliance. And now it's a focus on, How do we help grow the business?”

“Don't be afraid of new technology: embrace it. You should be going out and talking to other folks, asking, What's working at your company?”