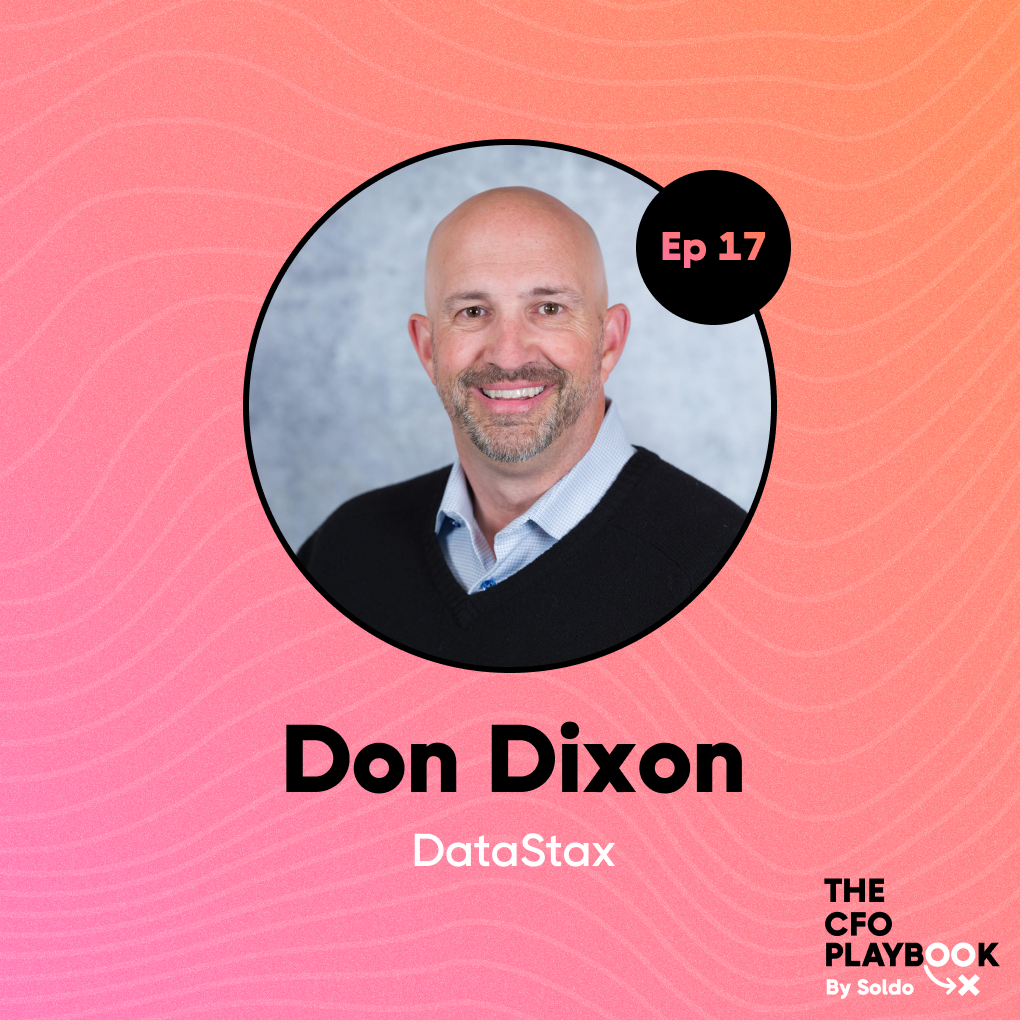 DataStax CFO Don Dixon says that in his 20+ years in finance, he’s learned that rising to the CFO position requires understanding something much more complicated than numbers: people.

Don Dixon has held finance positions in startups and established organizations, been through acquisitions and IPOs, and is now CFO at DataStax. In his experience, rising to the CFO position requires understanding something much more complicated than finance: people.

Once you’re at that executive position, managing numbers is a smaller part of your daily job than managing the people on your team.

Don is so committed to empowering the people in the finance department that he doesn’t even think of it as managing.

Although Don is technically in a higher position, he respects that the employees he works with in finance are all capable of doing their jobs without their boss peering over their shoulders. Don has the final say, but on a day-to-day basis, the rest of the team is trusted to work relatively unsupervised.

As for being a manager, Don says that he sees his role as closer to coaching. Instead of trying to mold each person to fit DataStax, he helps them improve their all-round skill sets so that they can achieve their career goals.

Even if that means employees end up leaving for a higher position the organization can’t currently offer, Don knows he’s done his job.

If you’re thinking Don sounds like a natural people person, you might be surprised to learn that he’s really an introvert.

He learned early on from other CFOs that the human element is a key component of getting the top job, and he’s been working on his people skills ever since, all while admitting it’s a personal challenge.

On this episode of The CFO Playbook, Don discusses how to help the finance department feel connected to customers and how to give everyone on the team just the right amount of transparency. He also explains why your IPO delivery team should be as small as possible.

What he does: Since November 2019, Don has been the CFO of data management company DataStax. Before joining DataStax, Don spent two decades in finance positions at multiple established companies and startups. He led API management software company Apigee through the financial side of its IPO, and oversaw acquisitions of cloud access security broker Skyhigh Networks and enterprise infrastructure software BEA.

Key Quote: “The toughest part of the CFO job is the people because it takes the most amount of time and energy if you want to do it right. Projects come and go, but if your goal is to retain the team and keep them on board for a long period of time, the only way to do that — other than throwing a ton of money at them — is by making sure that you're invested in what they're trying to accomplish.”

Where to find Don: LinkedIn

Give everyone just the right amount of information.

People want to feel included in company decisions, including financial ones. That means being as open with them as possible. However, the nature of finance means that certain information needs to stay private, especially at public companies. Instead of laying out exact figures, provide context to give people a clear general understanding. And use your judgement to assess how much each person can handle without feeling overwhelmed. Startups and smaller operations have an advantage, because you’re more likely to have a personal relationship with team members when there are fewer team members.

It’s anathema to many in tech, but product really does matter less than people. No matter which company, there will be people, and their happiness will affect business outcomes. Treat them like a coach would, not a manager. Managers think from a top-down position, trying to shepherd their team towards a goal unique to that specific company. A coach focuses on guiding each person with their needs and long-term career goals, which makes them feel more fulfilled by their work, and act as a better team player.

Remind the finance team that their work matters to customers.

Being part of the finance team sometimes means feeling like you don’t really impact customers. To combat that, before COVID, Don would have the members of the finance team physically sit with the internal team that their job supports. In some cases, they also report directly to that department. The company also uses an internal tool called Things I Learned (TIL) which helps everyone record interactions with customers, so everyone else can keep up to date on the feedback. Customers are also invited to weekly all-hands meetings to talk about their businesses, which inevitably leads into an explanation of how they use DataStax. These approaches help the finance team understand that its work does have a real-life impact.

Don’t make an IPO a goal from the start.

When you’re starting a company, your guiding light should always be your product, not a high-profile IPO. That said, from the beginning, base the financial processes on what public companies need to do. That way, if the IPO does happen, you’re in a good place with the regulatory requirements. Keep the team that’s working on the IPO small and close. People get excited about IPOs — especially if equity is part of their pay package —  but sometimes IPOs just don’t work out. Having to explain to most of your company that you’re no longer going public at best causes disappointment, and at worse, mass panic.

“What makes a successful company doesn't change internally: great people, great products, solving difficult problems for customers. But externally, the view of a great company has changed over time. It started with absolute growth at any cost, and it's evolved to something other than growth. It could be profitability, it could be becoming cash flow positive. There are lots of views.”

“In startups, what you're doing and what you're focused on has to be your North Star. You can't chase what the market is telling you is interesting right now, because it changes, it ebbs and flows, there’s a flavor of the month. If you're constantly chasing that, you're not necessarily doing what's right for the business, your customers, or the product.”

Know who to push with a challenge

“I try to give as much information as I can, to give people context while still keeping confidential things confidential. For those that I think need to be pushed a little more, I’ll talk to them, and potentially give them stretch challenges: things that expose them, but that they know are stretching them and making them better. And if we pull them back, they're still confident in what they did, because it was a good challenge for them. That’s the goal as individually applied. It’s something that's easy to do in a smaller company, and something that you can take advantage of when you're privately owned.”

The benefit of direct customer feedback

“At DataStax, we have a weekly all-hands meeting, and we get a customer to come and talk to us not about us, but about their business. If you start with ‘Tell me about you,’ typically they end with, ‘Let me tell you why you're an amazing partner.’ Having someone in real life having a conversation with you about their world and how you play into it is really important: people really enjoy seeing that we're changing the world.”

Introverts can be CFOs, too

“I'm naturally an introvert. The social part of my job takes a lot of energy for me. It's something that's absolutely been developed. People I work with are amazed when I say I'm an introvert, but my wife understands that when I come home, the last thing I want to do is have a conversation. It drives her crazy, because she's been waiting for 6 or 7 p.m. when I roll in the house to tell me what's going on in our lives and our family's life. And I just kind of slump down and go, ‘Can I get an hour?’ It’s very unnatural for me.”

Get out of your cube

“Early in my career, I started talking to other people who have been CFOs, asking them what are the things that I need to do [to get into that job]? And a lot of it was ‘Get out of your cube, get out of your office, and go talk to people.’ 15 years before becoming a CFO, I was pretty good in my cube. I was pretty good at supporting the person I supported, and the team I supported, but I wasn't that person that sat in the lunch room for an hour and talked to people. And that's an important part of the job.”

Build a team so they won’t always need you

“I've been at DataStax for 19 months now, and I've probably had 10 different functions report out of the group I support. When it's your team, there's protection: it's us in silos. But when it's the team, you don't worry about that. You coach the team that's in front of you and try to make it better, and at some point in time, it goes somewhere else. And that's actually a wonderful, liberating thing. You've built something or created something or put something on a trajectory so it now can exist somewhere else, potentially in an independent place.”

The emotional complexities of acquisitions

“I've been part of a couple of acquisitions. You’ve got transactions where you are a completely separate standalone entity, probably for a couple of years, and ones where you're put straight into a function. There are pros and cons with both. In the one where you're independent, you feel like you're yourself, but at the end of the day, there are still these 10 rules that you have to follow that are different, and you feel animosity, potentially. And then the other times where you get integrated right away, you lose your identity: you're not that company anymore, you're part of the new company. People in that scenario either hit the ground running or they opt out quickly.”

“People want visibility, so I don't try to hide what's going on. I try to give them as much visibility as I can. That way, they think they're a significant part of every decision, which I'd like them to be.”

“I've pushed someone who wasn't capable of taking the push, and had collateral damage. And I’ve coddled someone and not given them enough room to run. There's no perfect answer on how you do that. It's really about the feeling, and the conversation being as transparent as possible.”

“It's less about the company I'm at, and more about developing people so they become a better part of the world that we live in.”

“The goal isn't just to keep people. It's about being a part of that career choice with them, and hopefully making this the right place.”

“Something that I didn't do a very good job of when I was young in my career was being patient. No job should be too big or too small for you. Say yes to almost everything, because the more you learn, the better.”

“The product really doesn't matter — the people do, so make sure you're working and supporting people that you respect and trust.”