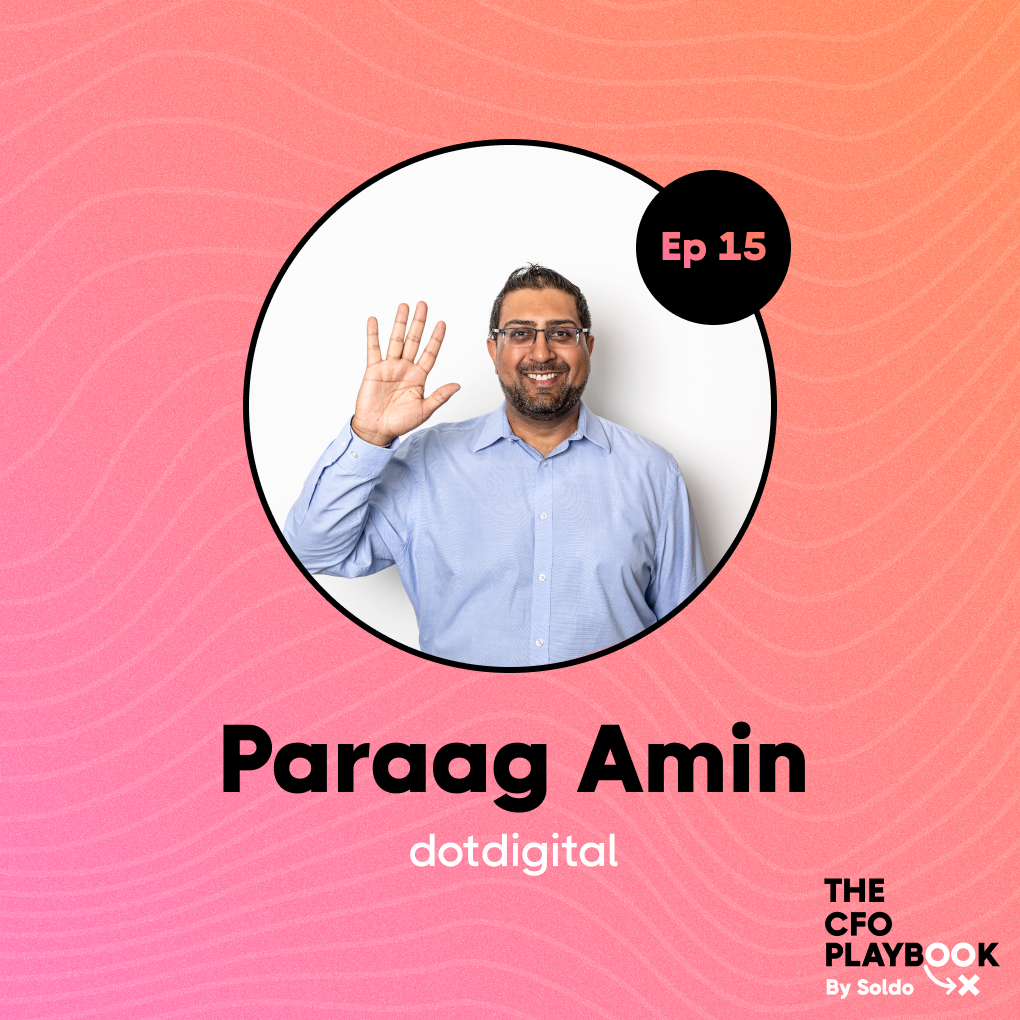 Paraag Amin’s route to becoming CFO of omnichannel digital marketing company dotdigital isn’t conventional — but it set him up for success.

Paraag Amin’s route to becoming CFO of omnichannel digital marketing company dotdigital isn’t conventional — but he believes it set him up for success.

The trick might surprise you, especially coming from an analyst-turned-CFO.

Paraag says that investors care less about the financial projections than many CEOs think. “A lot of people focus on the financials because it's easy to quantify …  For example, people talk about the TAM [total addressable market] being £20 billion by 2027, or whatever: but it doesn't mean anything when at the moment you have a £60 million business,” he says on the podcast.

The big selling point is the business model and the people behind it. If you can prove to investors that there is a large market, and that you have a viable product that has an edge over competitors, that’s a more convincing argument than throwing out exaggerated numbers.

His experience on one side of the transaction helped Paraag transition to the other side. He founded luxury lifestyle platform StyleCard in 2011, and in 2018 he was hired as dotdigital’s CFO. Helming the finances of a publicly traded company brings extra pressure, but knowing the company has a strong business model behind it makes him feel secure.

In this episode of the CFO Playbook, Paraag explains why analysts make great CFOs, his inside take on pitching investors, and why knowing an industry before you dive in will help you wrangle with the numbers in your first few months.

What he does: Having started as an analyst with roles in investment banks including Goldman Sachs, Citi and RBS, in 2011 Paraag founded lifestyle and fashion platform StyleCard. He became CFO of omnichannel digital marketing company dotdigital in 2018, and since 2019 has sat on the Bank of England’s Decision Making Panel.

Key Quote: “It’s very easy to look backwards and report on what's happened, and to show lots of pretty graphs and charts. To say, We've come from here and we're now here. But can someone extrapolate that to, We're here today, we need to get to X tomorrow, we're currently trending towards Y: how do we make the delta? That is the hardest thing for any business.”

Where to find Paraag: LinkedIn

When discussing the business, pitch the big picture first.

In any situation where you have to sell someone on your company, start by laying out the big picture and the long-term plan. Even if you’re talking to someone who typically deals in the details — like an engineer or accountant — you have a better chance of getting them engaged in what you’re doing if they understand the company’s story and vision.

Yes, this is true for investors too: they’re interested in the potential financial opportunities, but claims about numbers tend to be tenuous. Highlight your strong business model and skilled employees as solid foundations to bet on.

Apologies to accountants, but analysts have certain skills that go well with the top financial job in the company. Typically, accountants focus on reporting the numbers so far, whereas analysts are trained to take those numbers and project what they could mean for the business.

Preferably, the CFO will be able to not just put the figures into a report, they’ll be able to use them to predict potential issues, and take steps to prevent those issues from playing out. That said, many financial roles at dotdigital are filled by trained accountants — including CEO Milan Patel — so they certainly have their strengths.

Use automation to empower your employees.

Although the concept that robots are coming for humans’ jobs keeps many employees awake at night, finance is one area where the power of automation can be used to benefit your team. By using software to do the tedious manual side of running the finances, you can free up your team to spend more time getting stuck into challenging projects, studying, and working their way up the ladder. Patel started at the company as a financial controller in 2007, and was appointed CEO in 2016. Employees who can see a clear trajectory will be more motivated to work hard and stick around.

Here’s some advice to people starting out in their finance careers: Know the industry you’re trying to get hired in. You need to know the technical side of finance, but you won’t be able to get your hands on the company’s figures until you’re actually in the office. That first day — and the days after it — will feel less nerve wracking if you have a sense of how things work in the industry. You’ll be able to lay out reasonable plans sooner than a complete novice, and catch up on the details faster.

The highs and lows of being a publicly traded company

“Stocks do go up and down, but in the long term it's about making sure we have consistent, profitable growth with a strong top line. That has been the biggest challenge that we face versus our competitors who are privately listed, or the technology companies that don't have the same operating margin profile that we do. We're in a good space: Communication channels continue to increase, the volume of communication across digital channels will always continue to increase.”

Sell investors on your business model and your people

“The first question I would ask as a potential investor is how fast is the industry growing? What is your market position in it? What does the competitive landscape look like? That gives you comfort in the business model. You've then got to have the second element, which is comfort in the management team and the leadership: Can they execute on what they're saying? If those two boxes are ticked, the financials almost become a by-product.”

It feels wrong, but finances really should come second in a pitch

“Focusing on the financials to begin with is the wrong way of looking at it, and that's the mistake people often make. Because they're in a financial position, they'll present the financials first, because that's their bread and butter. That's what they know. It's a lot harder to present the investment case behind the business model and the management team. But for most investors, those are probably more important than the numbers, to a large extent, because the numbers should play out as long as you trust the first two.”

“A lot of companies now have that more operational CFO: underlying that is a data-driven decision-maker who wants to optimize the entire business. That’s the key: can you get every department to drive a higher ROI? If you can do that as a CFO, that's far more valuable than saying My revenue last month was X, my profit was Y, and that's in line with the business needs. That's great, but that doesn't give you anything to actually act on.”

Working from home is the new normal

“As a business, we've come to the conclusion that we will move to a much more flexible working model going forward. We're already operating in a lot of regions where flexi working was in place, where we don't necessarily have everyone in offices. The pandemic has shown that people can work more efficiently from home and with flexible hours than having to go into a fixed office every day.”

Give robots the boring jobs so the people can grow

“Automate the manual processes that take time but aren't really adding value, to allow your team to learn more around forecasting, around looking at the data, interacting more with other parts of the business, and growing as a person and as an employee. Helping the business, but also themselves, feeling like they're doing more. Ultimately that works in everyone's favor.”

“That satisfaction that comes from seeing someone in a more junior role grow and become more proficient and learn and understand the business. You get much more back from them, and you're going to have people who are more wedded to the business; who are happier in what they're doing day-to-day. They will be far more open to growing within that business than if you bring someone in who's got their own style that they've learned from somewhere else.”

Word to the wise — know the industry

“Whatever industry you're in and whatever company you're looking to work for, make sure you know it as well as you can. You can go to work for any company and try to learn it and understand what they're doing. But it's far easier to add value straight away if you've got a knowledge base of the business and its competitors. No CFO walking into the role on day one will know the numbers inside out, but you can know the industry. If you know the industry and you're able to articulate what it is you're looking to achieve, you can get to grips with the numbers to see what is it that you need, what gaps need to be closed. That gives you a headstart.”

“Having worked in the fund management side, the one thing you don't have a lot of is time. There are thousands of companies that you're looking at, so you don't get to spend days and days evaluating one business.”

“Ultimately, being a public business, you're always having to make sure that you manage according to what the market expects.”

“Change is not easy at the best of times. Change when you have to change but you're not sure what to change is even harder, because then you're trying different things and you may not have the capacity to do that. So if you can preempt areas of weakness, particularly before they happen, that's the Holy Grail.”

“Empower people to feel that they are playing a part in the growth of the business. Employee satisfaction, employee commitment to the business, and the happiness of the overall business and your culture: that's where it stems from.”

“Every single person within the business is a component that plays a part in its success. Unless that individual understands that, and it gives them a sense of responsibility, you're not going to have everyone working optimally to the benefit of the business.”

“In every organization that has a pyramid structure, people feel that the only way a door opens is if someone above moves. That creates politics.”