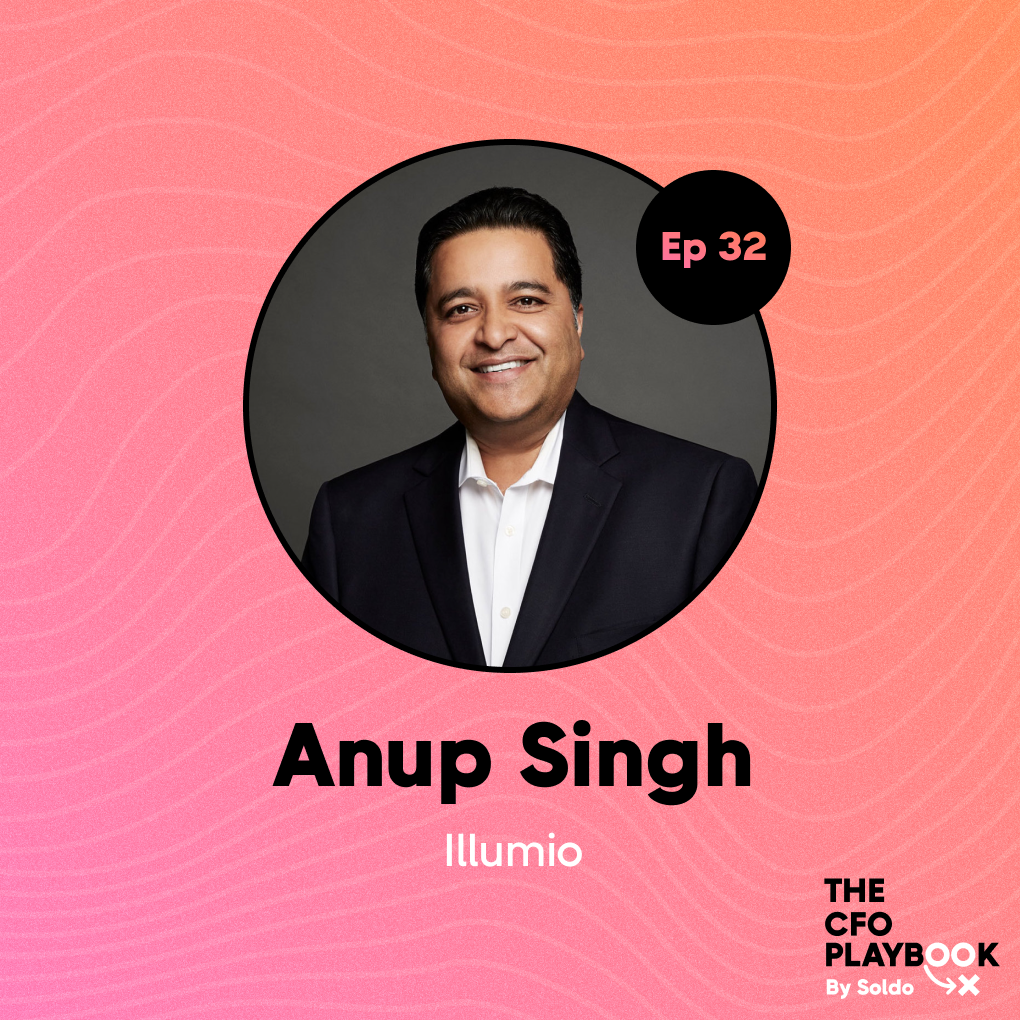 Anup Singh sees his job as CFO of cybersecurity company Illumio as more than just crunching the numbers. He takes the time to help develop the business and his team.

Since Anup Singh was hired to his first CFO job in 2006, he’s seen the role evolve from strictly financial-focused to what he calls “GM of the business.” (That’s general manager, non-sports fans.)

The CFO’s main role used to be crunching the numbers, publishing reports, building the budget, and controlling spending. They’re still doing all that, but they’re also expected to be more involved in setting business goals, and helping orchestrate growth.

Now CFO of cybersecurity company Illumio, Anup has taken the time to evolve his own skill set to meet these new demands. He’s also open to tools that will help him and his team gather and analyze data that can give them insights into how the business is doing financially, and what needs to change to meet its targets.

Speaking of his team, one point on which Anup has never wavered is his commitment to building a culture of trust and transparency.

That includes among the people he works with closely. Every quarter he gives someone in the finance department his CFO Excellence Award, for going the extra mile to achieve one of the company’s business objectives.

Anup also makes himself available to people working In the rest of the business. He has an “Ask Me Anything” Slack channel, in which Illumio employees can ask him questions about the company’s finances. He also hosts small meetings — called The Bottom Line — which function as in-person Q&A sessions.

On this episode of The CFO Playbook, Anup explains why he takes the time to explain Illumio’s finances to his non-finance colleagues, what he hopes to use artificial intelligence (AI) for, and why he relies on KPIs to guide business decisions.

What he does: In Anup’s second CFO role, at Clearwell Systems, he intentionally built a positive culture that contributed to the company winning an award for being one of the best places to work in Silicon Valley and the Bay Area. With 15 years’ experience as a CFO at various companies, he currently holds the position at cybersecurity company Illumio.

Where to find Anup: LinkedIn

Since Anup first became a CFO 15 years ago, he’s seen the role change from a purely technical job to one that requires business acumen. CFOs today need to understand how their work contributes to business goals. This is especially true in small companies that are trying to scale. The finances are the foundation on which you slowly build up. If they aren’t stable, and the CFO doesn’t have a vision that incorporates that growth, you’re on shaky ground.

Anup is a big believer in using data to make plans and set goals. One problem facing most companies is how to manage all the data they collect, so that it can be analyzed and turned into useful insights. This is where automation software — and especially artificial intelligence (AI) — is so exciting. Through the power of computers, we’re able to analyze lots more data much more quickly, which helps the company understand where it’s at and where it can go.

Motivate your team by opening up to them.

When you have big plans for your company, you need everyone to know the overall goal and how they fit into it. Anup believes in transparency and availability with your team. The greatest leaders understand the importance of treating their employees with empathy, and taking the time to motivate them. Anup connects with his team and people across the business, hosting digital and in-person Q&As, and giving out a quarterly CFO Excellence Award to someone who has made an extra effort to push the company to achieve its goals.

From playing the numbers game to GM of the team

“If you go back a couple of decades, the requirement or the strength of a CFO was in the accounting skills: It was in the technical skills. You were expected to be a chartered accountant, and the core area of responsibility was to ensure the integrity of the books and records of the company. That is absolutely still the case, so that hasn't changed or gone away. However, the role of the CFO has expanded significantly beyond the role of an accountant, or the role of simply looking into the numbers or being in charge of the books. The CFO is essentially now a GM of the business, along with the rest of the executive team.”

“Because the business is moving so quickly, my team’s job is to make sure the company always has up-to-date, real-time information as quickly, accurately and completely as possible. We have to have the tools and systems in place, we have to have the KPIs, the benchmarks, the measurements. You can only improve things if you're able to track and measure them, so our job is to give the business intelligent information. We translate the data into intelligent information we're using to invest, and to drive allocation of resources across the company.”

Today’s forecast brough to you by AI

“I'm really interested in artificial intelligence, and using the capabilities in machine learning to automate our processes. A number of my colleagues have started using bots, as an example, in their post process. To automate and accelerate the close, I'm exploring how we can use more automation, and more software and bots. Even companies trying to do forecasting for their business, it's not so much just building Excel spreadsheets anymore, it's using a lot of historicals, applying a bunch of data science on top of it, helping you to forecast.”

Why crunching the numbers matters to business

“The companies that are leading their industry are companies that are able to maximize the data they have, and do deep and comprehensive analysis of the behaviors of customers, their likes and dislikes. You can look at companies like Amazon as an example, or Uber. These are companies that are analyzing tons and tons of data every second, because you have to understand the trends: Here is where the market opportunity is, here is a need for the product or service you sell. … All of this involves the extensive analysis and crunching of data. At the end of the day, it's about obtaining a competitive advantage in your business.”

Everyone needs to know the goal to hit it

“I spend a ton of time with the folks on my team to make sure that all of our goals and all the work we do is aligned with the overall strategy and the goals of the company. It's a pyramid, it starts from the top and it cascades all the way down. As an example, if the number one objective of a company is growth, you want to make sure that the way you architect all the activities and metrics you have in place, the things you're trying to measure, and the incentive structures you build are really enabling growth.”

What to expect when you say ‘Ask Me Anything’

“A group of employees in the company were on [Anup’s Slack channel], asking if we’re investing in Bitcoin or in cryptocurrency. I made the point that I'm going to stay away from things I don't entirely understand, so the answer was no, we're not investing in crypto — at this moment in time, anyway. But [the Slack channel] does come up with some really challenging questions about the business, the financials and the strategy. There is a lively exchange of ideas and information.”

“Over time, the CFO role has evolved from being a job that was heavily focused on the tangible aspects — you can call it the IQ — to also including a lot of emotional intelligence now, or EQ. I believe that executives and leaders who are coming up through an organization really need to have the balance: they need to have the mix of IQ and EQ. Your skills from a technical standpoint are almost a given if you've reached a certain level in an organization. The companies, the leaders and the individuals who are really successful are the ones who understand the importance of EQ.”

Building a team shouldn’t be an afterthought

“I'm a builder: I love to build companies, I love to drive growth and scale. The ecosystem we have here in the Silicon Valley Bay Area is ideally suited to encouraging and cultivating the environment of growth and building things. I'm having a ball.”

“You've got the functional expertise of being the CFO — the accounting and technical skills. But more importantly, you have to be a driver of the business overall. You have to be closely engaged with the board of directors, the CEO and the rest of the executive team.”

“Especially in smaller companies, the CFO is really an architect trying to help the company achieve growth, achieve scale, and how you do that is by being in tune with the needs of the business.”

“It’s hard to improve things if you're not able to measure and track them. That’s the reason I'm a big advocate for the use of KPIs, metrics, benchmarking of data, seeing how you're making progress over time. … Having things we can quantify and show improvements and efficiencies over time is really important.”

“The deep engagement with your team is absolutely important in order to make sure everyone is on the same page and marching to the same beat.”