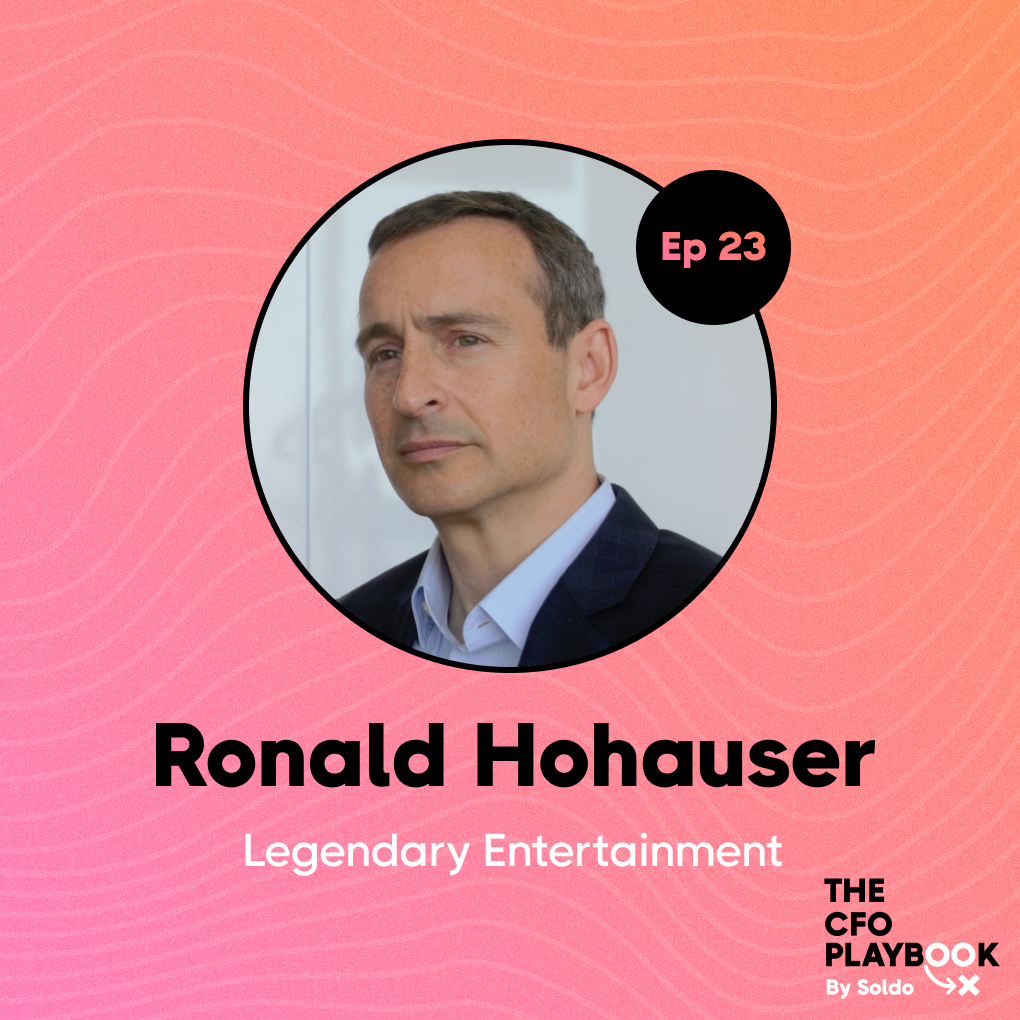 Ronald Hohauser, the CFO of Legendary Entertainment, talks about the importance of building a strong team, and how he learned to stop worrying and ride the highs and lows of a temperamental industry.

Ronald Hohauser didn’t always plan to become a Hollywood financial titan. After starting his career as a computer programmer, he stumbled on a chance to join the entertainment industry, and was excited by the opportunities it presented.

In 2004, Ron became Senior Vice President of Finance and Operations at Marvel Studios. He helped the studio transition from licensing its products to independently turning the then-niche comic book character Iron Man into a superhero icon — with the help of Robert Downey Jr., of course.

Having left Marvel and worked at a few other places, including Summit Entertainment, in 2017, Ron became the CFO of Legendary Entertainment. You may know the studio for blockbusters like the “Jurassic World” franchise and 2021’s “Godzilla vs. Kong.”

One thing Ron’s experience has taught him is that a strong, tight-knit team is imperative.

As he worked his way up the ladder in the entertainment industry, he learned that a CFO doesn’t have to do all the work themselves — in fact, they shouldn’t. Ron has got to a place where he’s comfortable relying on his team members, and mentoring emerging financial leaders is a big source of pride for him.

In this episode of The CFO Playbook, Ron talks about how he’s used tough times as learning opportunities, how and why he has to accept that some things are outside his control, and why he thinks being personally connected to your team is one of the greatest assets of a CFO.

What he does: Ron is the CFO of Legendary Entertainment, a film production company in Los Angeles. Legendary has produced multiple major movies, including the “Dark Knight” trilogy, the “Hangover” trilogy, and the upcoming “Dune.”

Key Quote: “Once you start thinking of yourself as a member of a team or as the conductor of an orchestra, you can expand your influence. It’s more fun to work collaboratively with people than to work on your own. People together are able to do some surprising things.”

Where to find Ron: LinkedIn

Learn from the tough times.

When Ron was struggling to get Summit Entertainment through a tough financial period before the studio released “Twilight” in 2008, he took on a lot of stress. He worked really hard to provide for his team and stakeholders, and ultimately was able to push through. Later in his career, when one of Ron’s companies went out of business, that previous experience of being on the brink of collapse helped him realize that there’s only so much in your control. And if you do fail, you fail as gracefully as possible.

Cultivating a solid team is your best safety net.

Ron says that early in his career as CFO, he thought he had to do all the work himself, and put a lot of pressure on himself to do it all. But eventually, he relinquished some of that control, putting faith in other members of his team. He and his company have benefited from that realization. A tough job feels easier when you have a group of people working on it. And when Ron started trusting other people, he was able to help build their careers, and take some of the pressure off himself.

Work within your spheres of influence.

Ron says that even as the CFO of a major movie studio, there’s only so much you can do at any one time. There’s a certain amount of luck involved when pitching and working on a movie, and sometimes what works once doesn’t work forever. In order to keep your cool, you have to learn to accept what you can and cannot influence, even if sometimes that means giving up on something you’re very passionate about.

Get to know your team personally.

When Ron started at Legendary Entertainment in 2017, he decided to take the time to get to know his staff individually. He learned not only about the ins and outs of their jobs, but also about who they were as people. When the pandemic hit in 2020, and forced many people to work remotely, Ron’s team had the advantage of already knowing each other well, and looking out for each other. Those personal relationships transcended the barriers of remote work far better than they would have if the team wasn’t connected on a personal level.

Own your responsibility as CFO

“There's a lot of responsibility to being a CFO. It's a hard job. There are a lot of different moving parts, and it's a lot of fun, and every day is different, but ultimately, you have to own it. If you're working with a company that is publicly traded and has investors who you're answerable to, or if you've raised private capital, or you have employees in the community, you're one of the leaders of the company. You’re responsible.”

“One of the reasons that we were ultimately successful at Summit was because of those first few movies that we released that did not work. We understood that that is the nature of the movie business: You have your ups and downs, and you have to be able to navigate both types of situations. I've seen many companies where maybe the first movie was a success, or they had a great first few years, and then they think, This business is easy. And then they might end up taking too much risk and they get themselves in trouble down the line. Adversity builds character, it builds experience, it builds confidence. There's really nothing like that to give you the tools and resilience you need to make it through the good times and the bad.”

CFOs don’t have to be great at accounting

“I've got a lot of calls and meetings, and I approve a lot of things, but I don't really do that much. I'm not an accountant, and thank goodness. I've got a fantastic Chief Accounting Officer and a great accounting team. I'll review financial statements and the like, but I couldn't do the accounting. I came up as a financial modeler, and I've got a great financial modeling team, but it's been a long time since I've created a large, complex model. I don't think I can do that today. Those models are fueled by late nights and caffeine, and I don't have the endurance for that anymore.”

You’ll never get it all done today

“There was a point early in my career where I would try to work as many hours as I could, and get as much done as I could today, so that I wouldn't have to do it tomorrow. But what I learned was that there will always be new stuff coming in tomorrow. So at some point, you have to be able to strike a balance and say I'm going to turn this off for the day. You need to know when to live to fight another day. There’s never enough time to do all the work that needs to be done: there's always something that'll have to be done tomorrow.”

Learn to ride the wave

“We do a lot of analysis for every movie that we want to greenlight. There's a lot of science that we can put in place, but ultimately, we're putting a product into the market, and it will be accepted by the audiences or it won't. If you're going to be in my industry — or many industries that have inherent uncertainty — you have to have the stomach for it. You have to develop the patience and resilience to ride the wave: to control and influence what you can, and understand that there are a lot of things that you're not going to be able to control.”

Set clear goals and ask for help achieving them

“You want to be intentional about what your goals are. If you have an ultimate goal with your career, it's important that the people you work with know that this is the direction you want to go. Ask for a mentor, and keep your eyes open. If you want to be a CFO, watch the CFO: see how they handle themselves in a meeting, how they make decisions, how they advise the CEO. Whether good or bad, you're going to be able to take valuable lessons from them.”

“It's fun for me to give people opportunities, and to let them grow in their careers. I’ve become somebody who manages people rather than tasks, and that has gone a long way to easing that stress, and allowing me to do my job better.”

“Don't get too high at the good times, don't get too low with the bad times. There are certain things that are in your control: you can work hard and use your talents and the relationships that you have. There are a lot of things that aren’t within your control. All you can do is bring your best, and try to act as honorably and sensitively as you can, but you have to be able to turn it off at the end of the day.”

“One of the things that I enjoy about my job is giving younger people opportunities, and empowering them, and mentoring them. You learn so much by doing. That's really what I want to give people that work with me.”

“By the nature of the numbers, not everybody can become a CFO. You need to be really good at one thing that is critical for the business.”