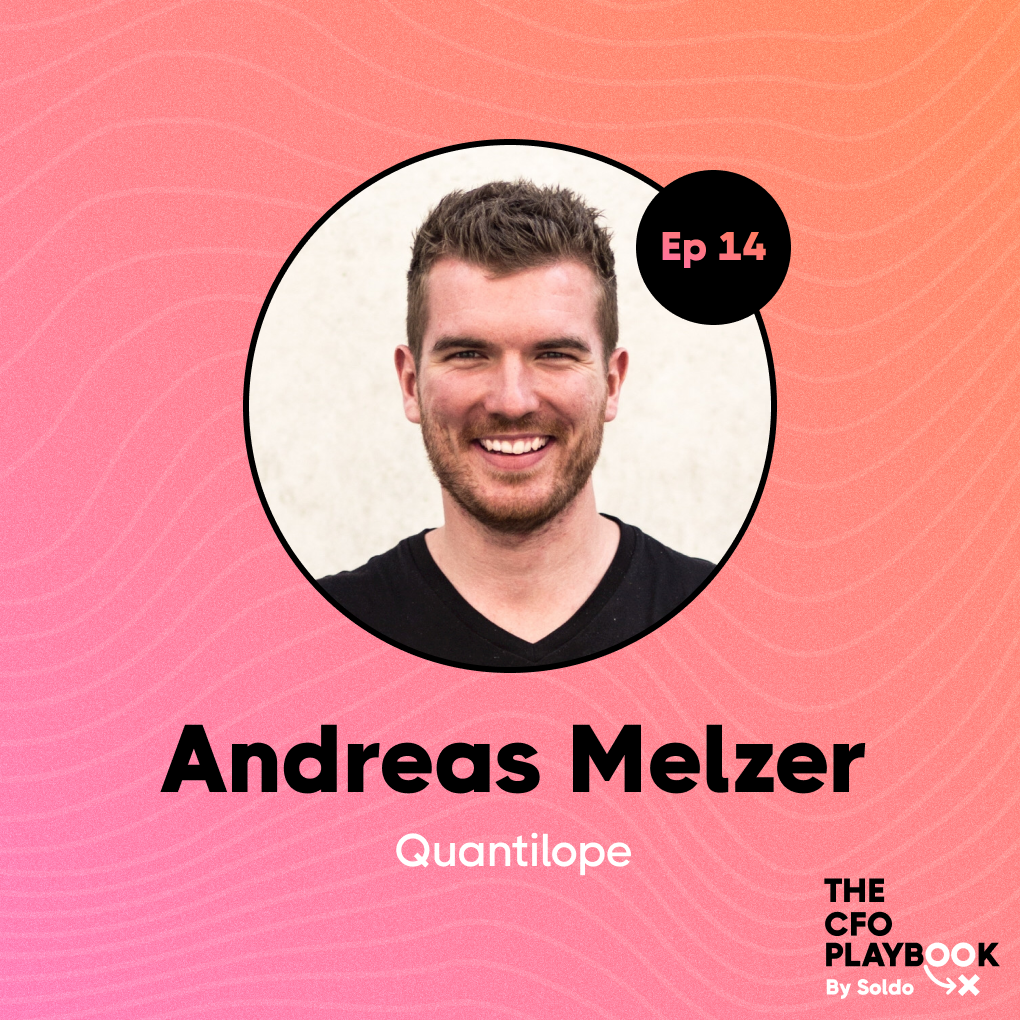 Andreas Melzer joined the consumer research company Quantilope two years ago and is the company’s Associate Director of Finance, which is similar to a Chief of Staff role with a finance focus. He also serves as a member of the leadership board.

An advocate for helping SaaS startups stay on top of their finances, he published a B2B SaaS finance model that has received more than 8,000 downloads.

While determining which KPIs and metrics a company should share while fundraising, Andreas believes in being transparent about the state of the business while keeping things simple.

Quantilope leverages a “land and expand” strategy. As a result, net retention is a main KPI that is a centerpiece of its pitch to investors. Additional data, such as how long it takes to upsell, is also included, “but really net retention is what it comes down to,” he says.

For Andreas, conversations with investors should align with internal conversations. So if an investor asks for a KPI that the team doesn’t track, he’ll let them know that the KPI isn’t something they’re tracking because it’s not central to strategy. That helps investors better understand what the business is actually about.

As a team leader, he’s cultivated a flexible cohort that accepts the ups and downs on the startup journey. He also prioritizes fostering a work environment that is based on harnessing each employee’s best professional self.

On this episode of The CFO Playbook, Andreas talks about how he’s scaling Quantilope’s international finance team, as well as the unique way he approaches the CFO and how he’s carved out a niche as a roving advisor with a finance focus. An avid chess player, Andreas also applies lessons from the chess board to the world of business strategy.

What he does: Andreas is the Associate Director of Finance and a member of the leadership board at Quantilope, an advanced consumer research platform.

Key Quote: “It’s a big focus of mine to make sure we’re creating an environment where the team can really evolve, where the employees feel engaged and committed to the company. That’s especially important in these times, when people are working from home and rarely see each other.”

When deciding which financial metrics to track, keep things simple.

When talking about KPIs and financial goals, it’s easy to get lost in the details. Andreas (who comes from an investing background) recommends putting yourself in the position of someone who doesn’t know all the specifics of your business when thinking about which details to share — without getting overly complicated.

Looking at the metrics you use to steer the business is a good place to start when thinking about what to include in discussion with investors. Andreas also recommends sticking to five to 10 KPIs to keep discussions clear and focused.

Scale an international finance team using a combination of insiders and outsiders.

Quantilope is headquartered in Hamburg, Germany, but has subsidiaries in Lithuania and the U.S. To ensure compliance with local tax laws, the team works with local specialists in each country. Andreas has also hired at least two people who have worked in other parts of the company and brought them onto the finance team. He says these have proven to be good hires because they’ve seen other aspects of the business and have a solid understanding of what is behind the numbers.

Andreas started playing chess at the age of nine and developed a strong affinity for the game. There’s no such thing as luck in chess, Andreas says — but your ability to strategize and think logically can falter depending on your environment. Psychology plays a big role too: “You can play much worse if you’re just having a bad day,” he says. Applying this to the workplace, Andreas says your environment needs to be optimized for employees to thrive. Sometimes poor performance has nothing to do with ability and can be improved dramatically by improving the environment.

“When engaging with investors, it’s key to understand what they’re looking for and what they need. Often you’re very focused on how you look at things, and while that’s very important, you need to understand how to present that to people who are not engaged in your day-to-day business.”

How to talk to startup investors — it’s a ‘delicate balance’

“We want to be very open about the state of business. Everybody needs to understand where we are in terms of the goals we set and where we stand in fulfilling our vision and our fundraising efforts. It’s normal for us to tell people when we’re fundraising or considering new fundraising, because that’s really part of what you’re supposed to do as a startup. But there are things that you could share that don’t help when understanding the state of the business, and instead spread fear. So it’s a delicate balance.”

Limit and simplify your KPIs

“You shouldn't have more than five to 10 main KPIs, because otherwise there will be the question of whether or not you’re focused enough in your own operations and if you really know what the KPIs that are most important to look at are. And KPIs should have a meaning and be easy to understand.”

But get ready to discuss KPIs with investors

“We typically try to steer the conversations with outside investors the way that we would have them internally. So if they are asking for KPIs that are just not that important to us, we normally tell them that’s not a KPI we're looking at because it’s not playing into our strategy right now. And that can help them understand what our business is actually about better.”

Don’t discount a good chief of staff early on

“When I was an investor, and investing in early stage startups, I always recommended they hire the position of a Venture Associate or Chief of Staff who can help build up a number driven and a metrics driven company from the start, taking some load off the shoulders of founders. Every startup will have a slightly different interpretation of Chief of Staff, but basically how I think about it is as the support for the founders who don’t have the time to focus on everything.”

Learn from the people around you

“There is so much to learn from others and so many mistakes you don’t make because you were given good advice in the first place. It has helped me to learn from everybody around me, from their successes and their failures.”

A good work environment is key

“In the workplace, it’s not only about what you do. You need to have a good environment in which you can really get the best out of yourself. That’s something that I think some people overlook: you can have two people with the very same skills who deliver completely different performances just because of their environments and not their abilities.”

“Coming from an investor background, I knew what investors wanted to see at a startup, and that was really helpful.”

“I would never suggest you bet everything on one horse: at some point, you’ll know which investor is the favorite and engage even more with them, but that takes time.”

“There are always people who are better than you at doing specific things. I think there's no one better than a founder in the very early stages of the startup, because they know the product in and out. They know the vision. They’re representing the whole culture, but at some point your tasks become so diverse, and you need more and more specific knowledge. There are always experts and other people who can bring in their experiences.”

“It was a learning journey for me to understand what the role of finance is in a startup. It’s much more than just accounting and bookkeeping. We want to emphasize these other topics because nobody normally thinks about them.”

“You should put yourself into the position of someone who doesn't know all the details of your business. What are they capable of understanding? Probably not the most detailed or nitty-gritty analysis that you’ve done.”

“Creating a common language for everybody that everybody easily understands — that is really the job of finance here and not only on leadership level, but also throughout the company.”